Whether you are thinking about drilling a water well on your property or about buying land and would like to know the potential for drilling on that property, you should consider many things.

There are no simple solutions, no detailed maps of ground-water presence, and no guarantees. But information is available that can be helpful when making a decision about whether to drill, or where to drill. This publication discusses points to consider when evaluating water-well potential and outlines basic steps to get the information you need. To further your understanding of the available information and why some areas provide water and others do not, we begin with a brief discussion of basic principles that govern ground-water occurrences.

The process by which water from rainfall and melting snow seeps into the soil and percolates into the saturated zone is called recharge. Places where recharge occurs are referred to as recharge areas. When this water reappears at the ground surface, this is called discharge. Besides flowing into streams, marshes, and lakes, ground water also may discharge in the form of springs and flowing wells.

Figure 1–The hydrologic cycle. Precipitation falls to the earth’s surface, runs off or infiltrates the ground, then moves back to the surface and into the atmosphere through transpiration or evaporation. The alluvial aquifer is the cross sectional area shown in yellow and labeled alluvium. 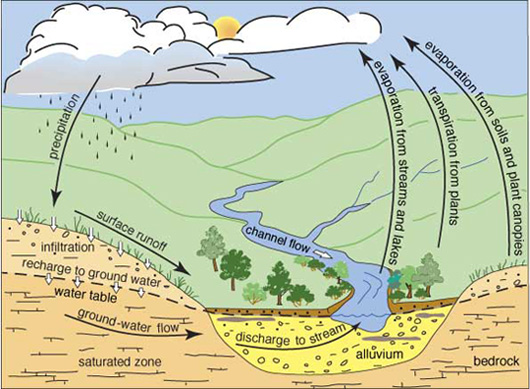 An aquifer is an underground formation of permeable rock or loose material that can produce useful quantities of water when tapped by a well or as discharge via a spring.

Porous media aquifers consist of aggregates of individual particles such as sand or gravel. Ground water fills and moves through the openings between the grains. Porous media where the grains are not connected to each other are unconsolidated. For example, an alluvial aquifer consists of loose sand, gravel, silt, and clay deposited in a stream valley or floodplain, and it is hydrologically connected to the stream flowing on its surface (figs. 1 and 2). In consolidated aquifers, such as sandstone aquifers, grains in the porous media are cemented together.

Figure 2–Confined and unconfined aquifers and how they affect water levels in wells screened in each type of aquifer.

There are no simple solutions, no detailed maps of ground-water presence, and no guarantees. But information is available that can be helpful when making a decision about whether to drill, or where to drill. This publication discusses points to consider when evaluating water-well potential and outlines basic steps to get the information you need. To further your understanding of the available information and why some areas provide water and others do not, we begin with a brief discussion of basic principles that govern ground-water occurrences.

Unconfined aquifers are bound by the water table; that is, they have no confining rock layers over the top of them (fig. 2). A well sunk into an unconfined aquifer will encounter water when the well reaches the water table, which is the approximate level at which water will stand in the well. Some aquifers, however, lie beneath layers of impermeable materials. These are called confined aquifers, or sometimes artesian aquifers. A well in such an aquifer is called an artesian well. The water in these wells rises above the top of the aquifer because of confining pressure; the level to which it rises is called the static water level. If the water level rises above the ground surface, a flowing artesian well occurs.

Ground-water Quality and Contamination: Water is never found in a pure state in nature. Both ground water and surface water may contain many constituents, including minerals, microorganisms, gases, and inorganic and organic materials. Some are present naturally, and others are human-induced.

The chemical nature of water continually changes as it moves through the hydrologic cycle. Although ground-water chemistry depends, in part, on the initial chemistry of the precipitation and recharge water, the most important natural changes in ground-water chemistry occur in the soil. Ground water may dissolve substances it encounters or it may deposit some of its constituents along the way. The eventual quality of the ground water depends on the kinds of rock and soil formations through which it flows. Thus, ground water in some areas may be too salty or contain too much bicarbonate of soda for domestic use or irrigation. Iron content can be very high in some settings, which usually does not render the water unusable, but it can be a nuisance because of rust staining of plumbing fixtures and an undesirable taste and smell. It is advisable to have the water in a new well tested to determine its quality and suitability for use.

Drilling a Well Versus Connecting to a Public Water Supply

Many landowners, in their quest for water, face a choice between drilling a water well on their property or connecting to the local municipal or rural water district. The advantages and disadvantages to each approach include the following:
Cost – Drilling a water well may involve a high initial cost, but the subsequent ongoing expenses, the cost of electricity for pumping the water and maintenance of the system, can be lower. Connecting to a water district also may involve a high initial cost, but it is often less than drilling a well. Subsequent monthly costs for water service can mount quickly if large amounts of water are used. Another important consideration is that a water meter generally improves the resale value of your property.
Risk – Drilling a well in many places can be risky. There are no guarantees that you will hit adequate water of good quality, even in areas where other wells have been successful. Connecting to a water district essentially removes the risk involved in obtaining a dependable, high-quality water supply.
Maintenance – When you have your own well, maintenance and its attendant costs are your responsibility. This can be troublesome, inconvenient, and expensive if pump, electrical, or piping problems arise. Being connected to a water district transfers most of the responsibility for maintenance to the district. Additionally, you most likely will still have water service even during electrical power outages at your house.
Availability – In some water districts, water meters are limited, and long waiting lists force applicants to wait years for a hookup. In such cases, a water well may be an attractive alternative if adequate ground water is available within reasonable drilling depths. In other places, no adequate ground water exists and connecting to a public water utility may be the only alternative, unless you are willing to have water hauled to your property and placed in a storage tank.